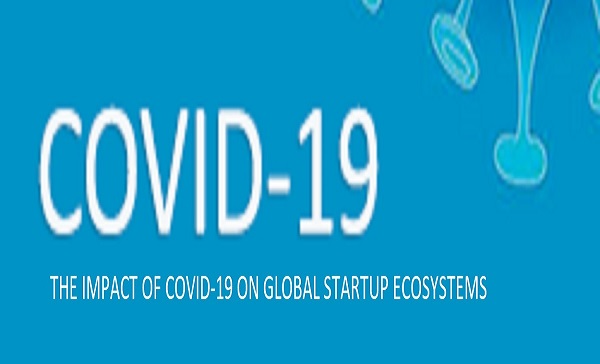 THE IMPACT OF COVID-19 ON GLOBAL STARTUP ECOSYSTEMS- PART 1

THE IMPACT OF COVID-19 ON GLOBAL STARTUP ECOSYSTEMS

As our world is shaken in the most dramatic way imaginable, it is time for our global start-up community to get closer, support, and learn from each other. Some of us remember the crash of 1987, the dot-com bubble burst of 2000-2001, and the 2007 financial crisis. With COVID-19, not only is the economic crisis sudden, but the human impact is also horrific.

For start-ups to survive this crisis, it's important to understand what's happening elsewhere through the successive waves of shock hitting regions ahead of where we might be, and identify the public policy and private actions having a positive impact.

China's industrial output already dropped 13.5% in January and February while retail sales decreased by 20.5% year-on-year. The drop in VC total investments was even more acute.

Chinese VC deals have contracted between 50 and 57 percentage points relative to the rest of the world since the onset of the crisis, as our analysis shows. If a drop like that happens globally, even for just two months, approximately $28 billion in start-up investment will go missing in 2020, with a dramatic impact on start-ups.

When we break down the numbers by region, we see that China saw the biggest drop in funding, followed by the rest of Asia. This is not surprising considering the importance of Chinese capital throughout Asia's start-up ecosystems and the start of the virus in Taiwan and Korea in January.

If a drop like what we saw in China happens globally, approximately $28 billion in start-up investment will go missing in 2020, with a dramatic impact on start-ups. Many start-ups will be unable to raise a new round of funding. The first to run out of cash will be those who had started to fundraise in the last few months, nearing the end of their runway before the crash.

It is difficult to assess how big of a percentage of start-ups will fail, but with start-ups needing to raise money every 12 to 18 months with three to six months' worth of cash at closing, a six-month drought in VC deals could wipe out a large portion of start-ups – and worse if we consider the potentially fatal direct and indirect blow to one's business model and operations (e.g. reduction in customer purchasing power, disappearing suppliers, etc).

2) Lessons from the Dot-Com Bust and the Great Recession

In addition to recent experiences of China and Asia more broadly, we can look at past recessions for historical analogies for what could happen in the future, especially if COVID-19 triggers a recession, which the International Monetary Fund said is already happening.

Related, technology IPOs in the U.S. dropped by 90 percent following the last two recessions; and tech IPOs in the U.S. have not yet recovered to pre-Recession levels, with the number of IPOs in 2019 (34) being 55.3 percent lower than in 2007 (76).

Nonetheless, although fewer dollars were invested, more companies got funded. This suggests that businesses that can become cash efficient might become even more likely to raise money following a recession, albeit at lower valuations and lower total funds raised. Even more importantly, these estimates based on the Chinese and Asian experiences as well as history are not destiny.

3) The Best and Worst of Times

Crisis begets opportunity in more than one way. As economies get upended, certain markets grow and open up. Start-ups might be able to create conversations and acquire talent in a way that was not possible during economic booms. For this reason, and as our friend Dane Strangler wrote, over half of Fortune 500 companies started during a recession or bear market.

Besides, over 50 tech unicorns started during the recession years of 2007-2009 and they are valued at a collective $145.2 billion, as Start-up Genome data shows. These unicorns include Asana, Quora, and Airbnb; which started because the founders were having a hard time paying their rent. While the opportunities arising from this crisis will be different from the ones during previous crises, they will still exist.

In the third week of March 2020, 3.3 million people in the United States filed for unemployment insurance. This is the largest such number of people losing their jobs in a single week since the Department of Labour started publishing these figures in 1967, and nearly 5 times more than the highest recorded previous number in October of 1982. As COVID-19 continues to trigger more lockdowns and quarantines, the economic toll, on top of the more dire human life toll, will be tremendous.

Considering this scenario and the fact that start-ups are the number one engine of job creation in our modern economies, governments and private leaders must learn from each other and act in a concerted fashion. New and young companies create most of the net new jobs in the economy. This is particularly true during recessions when massive corporations tend to focus on cutting down staff while the companies hiring tend to be young firms expanding their operations and growing through particular opportunities coming from the crisis.

Nonetheless, there is reason to be optimistic about economic restarts following the shutdowns. China, the place first hit by the virus, is slowly coming back to work: offices are being used again as we see from our ecosystem partners in the country  and manufacturers like Foxconn (the maker of most of the iPhones in China) announced they will be back to normal productions schedule around the end of March.

We are finding some promising initiatives. Denmark is covering 75% of salaries for companies that do not cut staff, Germany is offering to cover 60% of the new salaries for employees reduced from full to part-time, and the UK is considering a "Runway Fund" with a convertible note scheme for companies that cannot access bank loans.